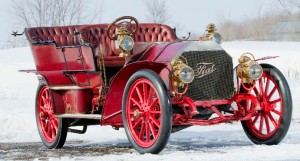 Some of the world’s finest automobiles continue to be consigned to RM Auctions exclusive sale during the Concorso d’Eleganza Villa d’Este weekend on May 25, 2013, at Lake Como, Italy.

Heading the ever-expanding list of mouth-watering vehicles on offer is the 1905 FIAT 60HP Five-Passenger Touring Car, built especially for American-based brewing magnate August Anheuser Busch. The example on offer is the second of just 20 chassis manufactured, the first having been supplied to Anheuser Busch’s friend, Kaiser Wilhelm II, of Germany. Often thought of as one of the first true, cost-no-object supercars, this mighty FIAT was ordered through the American importer Hollander and Tangman, and the completed chassis was delivered to the luxury coachbuilder Quimby, in New Jersey. Spectacularly extravagant and expensive in period—it cost in excess of $20,000, a staggering sum in 1905—chassis 3003 is offered for sale publicly for the first time in 108 years, having lived most of its life within a few miles of its very first home.

Described as being totally original, including paint, brasswork, upholstery and mechanics, and with complete matching numbers throughout, this FIAT now represents the only one of its kind left in the world, and it is without doubt one of the most coveted examples of the early high-powered, road going race cars to be found. With its aluminium-clad body, it still boasts many unique mechanical features fitted exclusively to the car in period. It is offered in excellent running condition, yet it retains a wonderful patina accrued over its 108 year life. The car graced the lawns of Pebble Beach at the 2012 Concours d’Elegance, and most recently, it was displayed at the LeMay America’s Museum.

“This early FIAT is one of those almost unrepeatable opportunities that rarely come to market,” said Max Girardo, managing director, RM Europe. “It is undoubtedly the ultimate performance and luxury car of its time, and to have a car such as this, having lived its life more or less in one place during a century of motoring, and to be offered today in such exceptionally original condition, is something very special indeed. It is our ability to consign and offer cars like this that really sets RM apart in the market.”

Of all the British-built pre-war sports cars, the supercharged, six-cylinder MG K3 Magnette is certainly the most iconic. Looking every bit as a pre-war sports racing car should, the MG K3 was designed to take on the best of the European marques in international competition. The 1933 MG K3, chassis K3001, offered at RM’s upcoming Lake Como sale is the most famous of all; not only is it the first production K3 built, but it is the world-famous ex-Earl Howe 1933 Mille Miglia works team car. A total of 33 K3s (plus two prototypes) were built, the origins of which was the brainchild of Earl Howe, who persuaded MG to build the three team cars for the Mille Miglia with his financial backing. With the aim of defeating the dominance of Alfa Romeo and Maserati in the legendary race, three K3 team cars were driven in the race, with chassis K3001 driven by Earl Howe and H.C. Hamilton. One of the other K3s, driven by Lurani, won the class, with Howe and K3001 claim ing a strong 2nd place. The performance of the MG K3s in the Mille Miglia that year is still seen by many as one of the British motor industry’s finest sporting achievements of the period.

K3001 went on to enjoy many additional racing success between 1933 and 1938, including participating in the1933 JCC International Trophy Race at Brooklands with Earl Howe behind the wheel, as well as notable outings at the Shelsley Walsh Hill Climb, the Coppa Montenegro, the Prix de Bern, and Donnington Park. Having passed through various owners’ hands, it was eventually acquired in 1995 by a world-renowned MG expert. In recent years, K3001 has continued to compete on the international scene, having participated at the Monaco Historique Grand Prix, the Le Mans Classic, and at the Goodwood Revival. This incredible, rare, and well-documented piece of pre-war motorsport history is expected to be highly sought-after by collectors at the upcoming auction (Estimate: €550,000–€600,000).

No exclusive collector car auction is complete without a Bugatti, but RM is in the enviable position of currently having four fabulous examples consigned to its May sale. Joining the previously announced 1930 Bugatti Type 46 Coupé Superprofilée is a 1927 Type 37 Grand Prix, a 1929 Type 40 Roadster,and a 1937 Type 57 Ventoux.

The Type 57 Ventoux, chassis no. 57524, is particularly noteworthy as a “one-off” example with a fastback, tear drop designed coachwork. A full matching-numbers car, it is a simply stunning example of classically elegant Grand Routier styling, and it was fully restored in 2006, having spent its life in exceptionally complete and original condition. (Estimate: €290,000–€400,000).The 1929 Type 40, chassis no. 40845, was delivered new to its first lucky owner in Paris in August 1930. Sporting the delightful and rare Jean Bugatti Roadster style of coachwork in classic red and black, only 39 Type 40s of this style were manufactured in period. This matching-numbers car has been in single ownership for 25 years, and it is estimated to fetch between €250,000 and €300,000. Last, but by no means least, of the recently consigned Bugatti trio, is the 1927 Type 37 Grand Prix, chassis 37254, surely one of the most iconic and classically beautiful racing cars of the 1920s. Just eight owners from new, it is offered fresh to the market, having been in the care of its current owner for 30 years. It boasts a fascinating early history, having been originally delivered new to London, England, before exported to Asia, where it spent time in China, Malaysia, and Singapore, enjoying some minor competition in period. In more recent decades, the car returned to Germany and competed in the 1972 Mille Miglia, before returning to its spiritual home in France, where it has resided ever since. This very original Bugatti is expected to garner strong interest from collectors (Estimate: €750,000–€1,000,000).