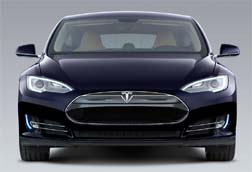 Tesla Motors has opened its first new design retail store Canada. Tesla’s new store, located in Yorkdale Shopping Centre, Toronto, features interactive displays and design studios where customers can design their own Tesla Model S on a large touchscreen and then view it on an 85-inch video wall in the back of the store.

“We are very excited to bring our new, interactive store design to Toronto,” said George Blankenship, vice president of worldwide sales and ownership experience. “Our approach continues to be focused on informing as many people as possible about EVs, our company, and the advanced technology behind Model S. Customers in our store are invited to ask questions and engage with informative product specialists to learn more about the many advantages of driving an electric car. We know we’ve done our job when every customer leaves smiling.”

Tesla is reinventing the car-buying experience by placing its stores and showrooms in high foot-traffic locations like Yorkdale Shopping Centre. Tesla Yorkdale is one of 10 new locations Tesla has opened recently.

By the end of 2012, Tesla will have 24 locations in North America and 34 worldwide. Tesla will continue to expand its retail network into 2013, supporting the mission to engage and inform as many people as possible about driving electric. 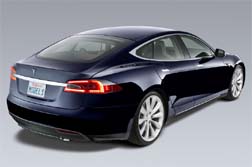 More than 13,200 reservations have been made worldwide for Model S through September 2012. Customers can reserve a Model S at one of Tesla’s retail stores or online.

About Model S
Tesla Model S is the world’s first premium sedan built from the ground up as an electric vehicle and has been engineered to elevate the public’s expectations of what a premium sedan can be. At the heart of Model S is the proven Tesla powertrain, delivering both unprecedented range and a thrilling drive experience. With a rigid body structure, nearly 50/50 weight distribution and a remarkably low center of gravity, Model S offers the responsiveness and agility expected from the world’s best sports cars while providing the ride quality of a luxury performance sedan. Model S has received many awards and accolades during its first year on the market, including Motor Trend’s prestigious 2013 Car of the Year. 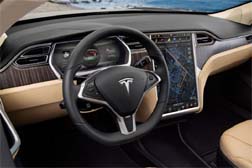 Without an internal combustion engine or transmission tunnel, the interior of Model S has more cargo space than any other sedan in its class and includes a second trunk under the hood. The Model S interior features a 17″ in-dash touchscreen with Internet capabilities, allowing for streaming radio, web browsing and navigation. 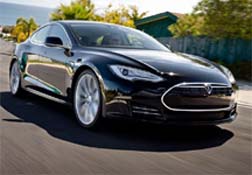