By westernadmin on October 26, 2012 in Aston Martin 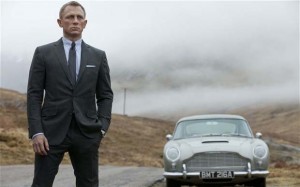 Daniel Craig is back as Ian Fleming’s James Bond 007 in Skyfall, the 23rd adventure in the longest-running film franchise of all time, opening in Vancouver on November 9.

Part of what has made James Bond into James Bond is his choice of transportation. Bond’s had many ways of getting around over the years, but there is one car in particular that says 007: the Aston Martin DB5. The car makes a welcome return to the screen in the 23rd James Bond adventure, Skyfall.

“We’ve flirted with other cars from time to time, but we always do come back to Aston Martin,” said producer Michael G. Wilson.  “It’s a signature car for Bond and a classic one, his own personal one.”

And there’s no Aston Martin more closely tied to Bond than the DB5, the 60s-era production model that Bond first drove in Goldfinger. For this film, this nod to Bond’s history not only would appeal to the fans, but make sense for the story. This is the sixth Bond film that the Aston Martin DB5 has been featured in: it first appeared in Goldfinger way back in 1964 and subsequently appeared in Thunderball, GoldenEye, Tomorrow Never Dies, and Casino Royale.

Actor Daniel Craig, too, fell under the spell of Bond’s classic car. “I love them, and this story was the perfect platform to re-introduce the DB5. The film is about Bond returning to his roots and confronting old demons, so it felt right. We get some good use out of it, too.”

And in Skyfall, Bond could not ask for a better location to see what the car can do: Glencoe, Scotland, has an iconic landscape – the mountains contain some of the oldest sedimentary and volcanic strata in the world. These mountains served as a beautiful backdrop for Bond and M’s drive through Glencoe’s scenic roads.

But the classic Aston Martin is not the only motor vehicle on screen. For the opening sequence, Bond chases a henchman of the villain through the streets of Istanbul. The chase required a fleet of twelve Land Rover Defenders and sixteen Audi A5s, all modified and reinforced in different ways to the requirements of the stunt and camera departments. Two of the Defenders had driving ‘Pods’ fitted to the roof of Eve’s car, allowing Naomie Harris to concentrate on delivering dialogue while being driven by former ‘Stig’ Ben Collins at 50 mph through the packed streets of town. 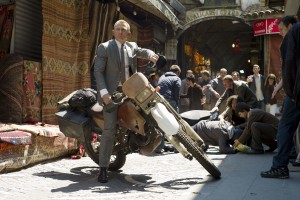 Later in the chase, Bond and the henchman ride Honda CRF250R motorcycles. The bikes were modified and dressed for the film – the henchman steals his from a policeman, while Bond commandeers another from a merchant.

The Honda bikes are also featured off-camera – since only a motorbike could keep up with the action, the filmmakers used the same motorcycle to carry the cameras.