By westernadmin on December 6, 2011 in Auctions, Bentley, General 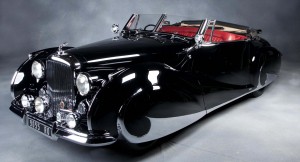 Building on its mantra of “Something for Everyone,” Barrett-Jackson Auction Company will unveil a new, elite breed of horsepower — Barrett-Jackson Salon Offering Collection— cars that are among the world’s most rare, valuable, collectible and coveted.

1947 Bentley Franay Mark VI Cabriolet, one of only two commissioned in 1947.

Nine one-of-a-kind vehicles are currently consigned in the salon-offering category and will cross the block January 15-22, 2012 at WestWorld of Scottsdale.

These rare vehicles include a 1947 Bentley Franay Mark VI Cabriolet (Lot #5005) (Chassis Number B 20 BH  VIN B25071), universally recognized as the most successful and expensive post war Bentley/Rolls-Royce automobile of all time with the Concours and auction record to prove it. In August of 1991 at the Rolls-Royce national meet, the Bentley Franay was judged by its peers as “Best of Show” among all competing Rolls-Royce and Bentley automobiles from around the world. In 1999 it won the most coveted award that the RROC (Rolls-Royce Owners Club) could bestow, the Royce Memorial Trophy and top senior award “Best of Prior Best of Show.”

“We are consigning six full days of a diverse offering of vehicles for every level of enthusiast,” said Steve Davis, president, Barrett-Jackson. “I’m looking forward to producing a docket that will contribute to the overall excitement that can only be experienced at a Barrett-Jackson event.”

Barrett-Jackson’s Scottsdale collector car auction has become one of the world’s preeminent events, with attendance now exceeding 250,000 automotive enthusiasts each year. The 2012 automotive lifestyle event promises to deliver the very best in exotics, customs, classics, Resto-Mods, Hot Rods and original collector vehicles. The 41st annual collector car auction will also have events and activities for the whole family including fashion shows, live demonstrations, ride ‘n drive events with Ford, GM, celebrity sightings, live music and much more. A complete schedule of events will be announced in the coming weeks.