By westernadmin on July 24, 2020 in Chevrolet, Classic Cars 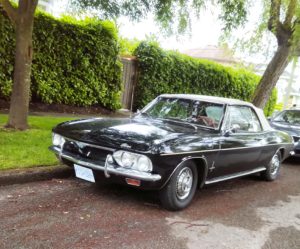 The engine is all-aluminum air-cooled flat six, which, in turbo charged form, as in the Corsa model, produces exceptional performance for a compact car. The multi-dial interior and high-back seats also made the Corsa a sporty model in the ‘60s.

With its swing-axle suspension at the rear, the Chevy Corvair was cutting edge when introduced, but its rear-mounted engine caused a weight imbalance that resulted in poor handling and in some instances would cause the car to roll. Additionally, due to weak hinges that connected the hood to the frame of the car, the hood often became a dangerous projectile that caused many fatalities.

The American political activist and consumer advocate Ralph Nader in his landmark book, Unsafe at Any Speed, first published in 1965, deemed the Corvair “the most dangerous automobile on the road.”

The Corvair received full independent suspension in its 1965 model and Chevrolet implemented safer designs to resolve the problems, however, the damage had been done and production was ended in 1969.

The Corvair represented several breakthroughs in design for mass-produced Detroit vehicles, with close to 1.8-million cars produced between 1960 and 1969.

If you have a Corvair story, send it to us at jstewart@westerndriver.com.