By westernadmin on February 10, 2020 in Bugatti, Classic Cars 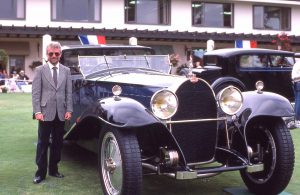 Derek Bell standing beside the famed Coupe Napoleon at Pebble Beach in 1985.

British car owner and Vancouver ABFM attendee Derek Bell stumbled upon a video about the history of the famed Bugatti Coupe Napoleon on YouTube.

The video deals with the history of the Bugatti Family and the six massive Type 41’s that were made.
In 1985, Bell and a friend attended the Pebble Beach Concours d’Elegance. The organizers of the event had contrived to have all six of these magnificent vehicles together on the upper lawn for the first time in history.
Bell has also visited the Briggs Cunningham Car Museum in Costa Mesa, California, where the Type 41 Kellner Coupe resided at the time. He was able to sit in the car and simply experience the magnificent history of it, play with the clutch and the gearshift and simply be mesmerized.
In 1997, Bell visited the Schumph Museum in Muhouse, France, where the Coupe Napoleon and the Park Ward Limousine are on display. These motorcars are art.
Check out the video….
https://www.youtube.com/watch?v=xucZkUfm5t8