By westernadmin on August 21, 2019 in Mercedes-Benz 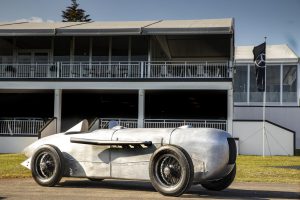 The aerodynamically bodied SSKL racing car included a Daimler two-cylinder V-engine, which represents the beginning of motorsport. Vehicles equipped with engines of this type won the first racing car competition 125 years ago—the race from Paris to Rouen on July 22, 1894.

The aerodynamics pioneer Reinhard von Koenig-Fachsenfeld (1899 to 1992) designed a trailblazing streamlined body for the powerful Mercedes-Benz SSKL racing car in 1932. On May 22, 1932, Manfred von Brauchitsch entered the international Avus race in Berlin with this vehicle, which was unusual to spectators of the time (the public promptly dubbed it the “gherkin”), won ahead of Rudolf Caracciola in an Alfa Romeo.

Mercedes-Benz Classic reconstructed the innovative “silver arrow”, as described in a radio report at the time from 1932, with the highest level of authenticity. This includes the lightening holes in the chassis, typical of the SSKL, which were constructed according to the original drawings. In total, the racing car weighs 275 pounds less than the Mercedes-Benz SSK, which served as its basis. The complete reconstruction of the streamlined body according to historical documents was particularly labour-intensive. For this purpose, experts researched the archives of Mercedes-Benz Classic and those at Schloss Fachsenfeld, which the engineer and inventor Reinhard von Koenig-Fachsenfeld transferred to a foundation in 1982.

The victory of the Avus racing car in 1932 was one of the many highlights in 125 Years of Motorsport at Mercedes-Benz. During this era, aerodynamic optimization was established as a key element in motorsport. The brand commemorated this milestone at the Pebble Beach Concours d’Elegance with the driving premiere and presentation of the SSKL racing car. 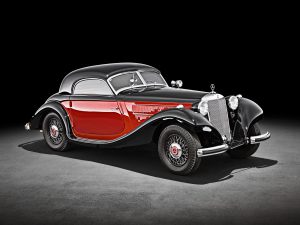 Alongside the SSKL, an elegant Mercedes-Benz 320 n combination coupe (W 142) from 1938 also took part in the Pebble Beach Tour d’Elegance.

A comprehensive presentation of the latest high- performance vehicles by Mercedes-AMG rounded off this motorsport tradition.