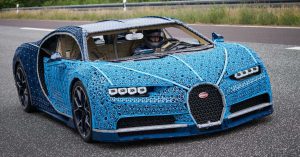 Life-sized Bugatti Chiron made with more than one-million Lego elements.

Canadian car fans of all ages were the first in North America to have the chance to get up close to an engineering masterpiece, as the only LEGO Technic Bugatti Chiron in the world made its North American debut at the February 2019 Canadian International Auto Show in Toronto.

Made of more than one million elements, the LEGO Technic Bugatti Chiron took 13,438 hours to construct by a team of 16 specialists and not a single drop of glue was used. This super car was a testament that with LEGO Technic you can build for real.

Seen from a distance side by side, the resemblance of the two cars is striking. Inside, every single detail of the original car has been carefully and precisely recreated in LEGO Technic elements—from seats, to dashboard, to steering wheel.

“This life-size model is a first of its kind in so many ways and with it, we wanted to push the boundaries of our own imagination,” said Lubor Zelinka, design manager, LEGO Retail Model Production. “For more than 40 years, LEGO Technic has allowed builders to use their creativity in a way that challenges them to build beyond the design and engineer new functions.”

To rev up the creativity and imaginations of car enthusiasts of all ages, the LEGO I Love Car experience at the Canadian International Auto Show allowed builders to create their own dream car, race it down LEGO Race Ramp, and capture championship moments with a photo opportunity where attendees were able to sit in a one-of-a-kind LEGO Go-Kart or LEGO Friends car.

Subaru’s first hybrid: 2020 Crosstrek
Porsche Macan will be electric in next generation version