By westernadmin on March 16, 2018 in Motorsport, Rallying 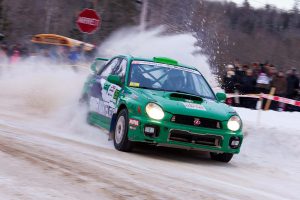 The Rally Promoter Association of Canada (RPAC) has launched efforts to bring a round of the FIA World Rally Championship (WRC) to Canada.

“We started looking at this idea in 2011,” said founding director Keith Morison. “Recently things have started coming together and we think this is the right time to put a real effort into making this idea a reality.”

The idea of bringing the WRC to Canada has been discussed over the years, by both Canada and European organizers and is now viewed as an idea whose time has come.

“We welcome the formation of this organization to further explore the opportunities for a WRC event in Canada and look forward to working with them to pursue all possible options together for an exciting future,” said Oliver Ciesla, WRC promoter and GmbH managing director.

Ciesla and the Federation Internationale de l’Automobile (FIA) have long stated the desire to expand the global impact of the WRC by increasing the number of events outside of Europe. Canada is of great interest to the WRC, its car manufacturer-backed teams, and commercial partners. It offers the WRC further access to the North American market and can provide a new sporting challenge and competition environment.

The RPAC is a federally incorporated non-profit organization and has affiliated with the Canadian Association of Rallysport (CARS) as a member club. Part of RPAC’s mandate is to work in the best interests of rally sport in Canada, a goal that CARS encourages.

“The Canadian Association of Rallysport is pleased to support the newly formed Rally Promoter Association of Canada and their efforts in exploring the opportunity for a WRC event in Canada,” said CARS president John Hall. “A WRC event is a huge undertaking and something that must be well thought out, well prepared and engage a broad base from across the country if it is to have a chance of succeeding. I have complete faith that RPAC includes the right people with the right approach to bring a WRC event to Canada.”

Morison is joined on the founding Board of Directors by Jorge Dascollas, Martin Burnley, Chris Kremer and Warwick Patterson. Together they bring a range of experiences within the sport as well as a strong mix of skills from their personal lives and careers. This group will lead the initial investigations and will set the foundation of the event in place, making sure the project will bring benefits to the rally community across Canada.

The project expects a five-year build-up to the first FIA WRC event and has several hurdles to clear before the event plans are finalized.