By westernadmin on January 29, 2018 in Lamborghini 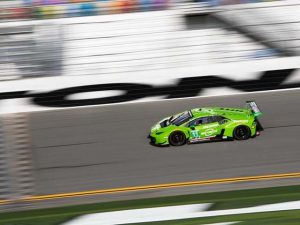 After 24 hours and 750 laps, the #11 Grasser Racing Team Lamborghini Huracán GT3 conquered the 56th edition of the famous endurance race at the Daytona International Speedway on Sunday January 28, 2018.

This is the first success ever for Lamborghini in the prestigious 24 Hours of Daytona, only three years after the first race on the tri-oval of Dayton in 2016.

The podium was completed by the #48 Paul Miller Racing Lamborghini Huracán GT3, finished in a solid third place with the crew formed by the Lamborghini Factory Driver Andrea Caldarelli, Bryan Sellers, Madison Snow and Brice Miller.

“We started the season taking a historic victory for the company, we set this for Lamborghini Squadra Corse as a growth target,” said Giorgio Sanna, Head of Motorsport of Automobili Lamborghini. “It was a tough race that enhanced the performance and reliability of the Lamborghini Huracán GT3 and I would thank the Grasser Racing Team and our drivers for the exceptional result.”