By westernadmin on August 18, 2016 in Collector Hobby, Historic Vehicle Association 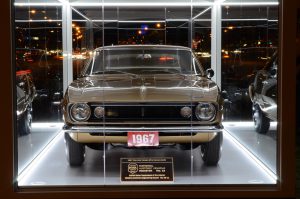 The Woodward Dream Cruise is a classic car event held annually on the third Saturday of August in Metropolitan Detroit along Woodward Avenue.

The 2016 event celebrates Camaro’s 50th anniversary and introduction of the Camaro model that took place in Detroit in August 1966. The first Camaro built is also being recognized as No. 15 on the HVA National Historic Vehicle Register program in partnership with the U.S. Department of the Interior, Historic American Engineering Record (HAER) to be archived in Library of Congress.

The exhibition at the Woodward Dream Cruise is part of an HVA public heritage program launched on the National Mall in Washington, DC in April 2016, where President Taft’s 1909 White Steam Car and President Reagan’s 1962 Willys Jeep CJ-6 were similarly displayed and honoured. 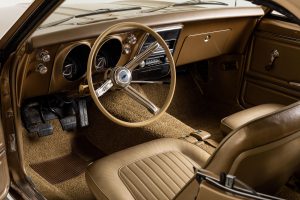 “This first Chevrolet Camaro launched one of the greatest rivalries in automotive history with the Ford Mustang,” said Mark Gessler, president of the HVA at the opening of the display. “That rivalry is still alive and well 50 years later and we are here at the Woodward Dream Cruise with a public exhibition to celebrate where it all began.”

The first Camaro built is owned by 18 year-old Logan Lawson of Hutchinson, Kansas. Lawson found the car online in Oklahoma when he was in the seventh grade. His father inspected the car and completed the purchase. Over the next five years, father and son completed extensive research on this and the 52 other pilot prototypes and returned the Camaro to its launch day debut specifications.

From 1966 to 2011, the car passed through several owners and dealerships with the distinction of being a very early Camaro, possibly even the first. It was built up as a drag racer before Lawson purchased the car.

Author Phillip Borris helped confirm the Norwood, Ohio pilot production build records and researcher Jamie Schwartz contacted the families of the prior owners to fill in the history.

The first Camaro built was completed at the GM Assembly Plant in Norwood, Ohio on May 21, 1966. It was the first of 52 pilot prototypes produced, 49 at Norwood and three more produced in Los Angeles. The 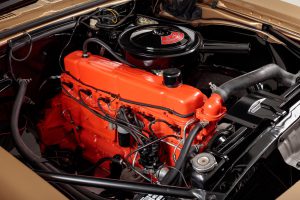 car is a base model with the 140 hp 230 ci. inline 6-cylinder engine. The seat belts, wheel covers and whitewall tires were the options present on the first Camaro built. Base price for the new Camaro: $2,466.

Here is a flashback from a period advertisement of how Chevrolet marketed the three versions of the Camaro.

Ford spent years teasing the public with show cars and concepts that hinted at the anticipated Mustang. GM, by contrast, revealed nothing about the Camaro until the car’s name announcement on June 9, 1966, which meant “comrade or pal” according to GM. The formal Detroit launch took place in August 1966. Dealers had cars within a month.

During the 1960s, General Motors would often launch a production line with the first car painted gold. This was probably the case for the first Camaro built with the order for special “show paint” in Granada Gold with gold vinyl seats and gold carpeting. Six generations of Camaros are proof it was lucky.

The Camaro is popular, but just how popular? With over more than one-million collector car vehicles insured in the United States, Hagerty ranks the Camaro third in overall popularity. The most popular collector car is the Chevrolet Corvette followed by the Ford Mustang.

View all posts by westernadmin →
Riding a Triumph Tiger in the wild: A motorcycle adventure to Alaska
OpenRoad VW celebrates grand opening with summer beach party