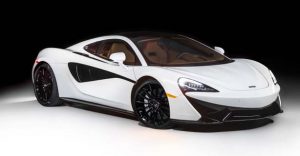 McLaren Automotive has released details of the new McLaren 570GT by MSO Concept ahead of its debut on the famed 18th fairway of Pebble Beach Golf Course at the Pebble Beach Concours d’Elegance, the world’s highest-profile competitive display of collector’s cars.

The McLaren 570GT by MSO Concept will be displayed on the concept lawn where McLaren has previously displayed many of its concept and future models, most recently the McLaren P1.

The McLaren 570GT by MSO Concept further accentuates the McLaren interpretation of a GT car. Previewing a collection of enhancements created by McLaren’s bespoke division MSO, which was itself launched at Pebble Beach in 2012, the car is the first example of the recently-introduced 570GT to receive the attention of McLaren’s finest team of craftsmen and designers. They have added styling, feature and material enhancements such as an Electro-Chromic Roof that are all destined to become available through the MSO Defined portfolio.

Firstly, the McLaren 570GT by MSO Concept delivers an improved aural experience both for the driver and onlookers thanks to its new MSO Exhaust system. Manufactured from titanium and consequently 30 per cent lighter than the standard stainless steel system, the MSO Exhaust takes learnings from the McLaren 675LT project, delivering a progressively richer and more characterful tone more immediately as the revs rise than the standard exhaust.

The MSO Exhaust’s heat shields are also finished in a golden titanium nitride tint, visible through the rear air ducts, which naturally change color to a blue/purple as the system heats and cools through its cycle.

Externally, the McLaren 570GT by MSO Concept is finished in Elite ‘Pearl White’ paintwork. Complementing the Pearl White finish is an MSO Piano Black package, delivering a deep gloss black finish to exterior details including the wheels, side skirt, front and rear and door inserts, as well as interior details.

To complete the bespoke nature of the Concept, interior components, interior door inserts and tunnel sides are all finished in a rich gloss lacquer.

The McLaren 570GT by MSO Concept builds upon the recently-introduced 570GT—the most luxurious and refined McLaren to date.

View all posts by westernadmin →
San Diego’s ‘Hops Highway’: A road trip that includes breweries and safaris
Riding a Triumph Tiger in the wild: A motorcycle adventure to Alaska