By westernadmin on January 4, 2022 in Aston Martin 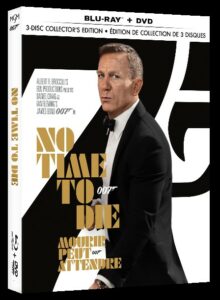 Western Driver is pleased to offer our readers & Vancouver ABFM Facebook friends a chance to bring home ‘No Time to Die,’ the extraordinary 25th installment of the James Bond series.

The top-grossing Hollywood film of the pandemic era at the international box office was available to own for the first time on 4K Ultra HD, Blu-ray™ and DVD Collector’s Editions on December 21, 2021, from Albert R. Broccoli’s EON Productions, Metro Goldwyn Mayer (MGM) and Universal Pictures Home Entertainment.

‘No Time to Die’ features four iconic Aston Martins from the past, present and future: a DB5, the car that started it all when it debuted in ‘Goldfinger’ in 1964; a V8 saloon, similar to the one first seen in 1987’s ‘The Living Daylights’; the DBS, the flagship of the Aston Martin range, which makes quite the entrance in the film; and Valhalla, Aston Martin’s revolutionary mid-engined sports car, which makes a special cameo appearance.

Email your name & address to jstewart@westerndriver.com (email subject line: “No Time to Die”, and we’ll enter your name in a draw for a Blu-ray™ (3-disk Collector’s Edition set) featuring 6X the picture resolution of DVD, exclusive extras, and theatre-quality surround sound.

To view a trailer of ‘No Time to Die’, click here.